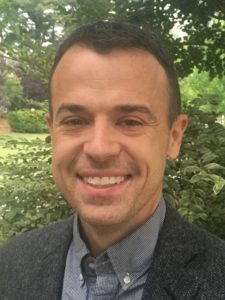 In this new position, Stephen Vaisey, Ph.D., is responsible for envisioning and implementing new directions for the company in such areas as course offerings, instructors, marketing and technology. He is a longtime and highly-evaluated instructor for Statistical Horizons, with seminars that include Treatment Effects, Multilevel and Mixed Modeling, and (most recently) Longitudinal Data Analysis Using R.

Currently a Professor of Sociology at Duke University, Dr. Stephen Vaisey has published papers in the American Journal of Sociology, the American Sociological Review, Social Forces, and other top journals. He completed his Ph.D. at the University of North Carolina at Chapel Hill in 2008 and was an assistant professor at the University of California, Berkeley, before moving to Duke in 2011. At Duke he teaches the doctoral statistics sequence—which he recently converted from Stata to R.

His substantive research focuses on the measurement, origins, and consequences of moral and political differences. He has also published on the benefits and limitations of using panel data for causal inference.

Vaisey has taught applied statistics courses at the graduate level for over a decade. He takes great pleasure in helping people gain an intuitive and practical understanding of statistical methods and has received outstanding reviews for his teaching.